Renewable Energy: Vallourec will equip a geothermal site in France with its premium tubes and connections

Vallourec won a new contract for unconventional geothermal energy (deep wells, high temperatures) to deliver premium OCTG  products for exploring underground reserves in France.
The Group will assist Fonroche Géothermie, the leading French company in high temperature geothermal energy, in the exploration phase for underground reserves in Alsace (East of France), on the site of the former Reichstett refinery (municipality of Vendenheim) and the Eckbolsheim site. The project will consist of two to four wells drilled in doublets (one injection well and one production well) for between 1700 and 3400 tons of semi-premium and premium tubes and connections, including the VAM® 21TM, the highest performing connection on the premium market to date. A team of VAM® Field Services technicians will also be involved, supervising the on-site descent. The drilling of the first well is expected to begin in June 2017. If results are positive, production will start soon thereafter at the wells.

For this project, the tubes are being manufactured in Vallourec’s European factories in Mülheim and Rath (Düsseldorf) in Germany and in Aulnoye-Aymeries in northern France.The contract follows the one obtained last spring for the geothermal plant in Holzkirchen, in Bavaria, for which Vallourec successfully delivered 1500 tons of tubes and whose operation is set to begin in 2017. They bear witness to Vallourec’s commitment to renewable energy.

Geothermal plant projects are spreading throughout the world, confirming the rise in this technology for producing electricity from green energy. Today, only 6 to 7% of global potential for geothermal energy is in use, but as this figure is expected to grow fivefold for electricity production and twofold for urban heating by 2030, Vallourec intends to position itself as the leading partner in this future market.

Why use tubes designed for the oil and gas sector in a geothermal energy project?

A geothermal energy project looks more like a mining project in the way it is planned and managed than a project in any other renewable energy sector (e.g. solar panels/wind turbines). It includes locating resources in the ground, setting up drilling equipment, and developing an extraction system. Furthermore, there are many similarities in terms of mechanical constraints (drilling depth and pressure), environment, (e.g. corrosion), and the (extreme) temperatures the tubes must withstand. This means that Vallourec’s expertise in the oil and gas sector makes it able to respond ideally to the needs of this type of operation.

What is geothermal energy?

Geothermal energy consists in exploiting natural heat underground in a virtuous cycle, using production and reinjection wells. These are the wells that Vallourec equips with its premium steel tubular solutions without soldered joints, initially designed for the oil and gas sector.
The production well recovers hot water from the groundwater table. The water then travels to a plant where its heat is either transferred to a domestic water network to heat homes or transformed into electricity and transferred to the power grid for household use. 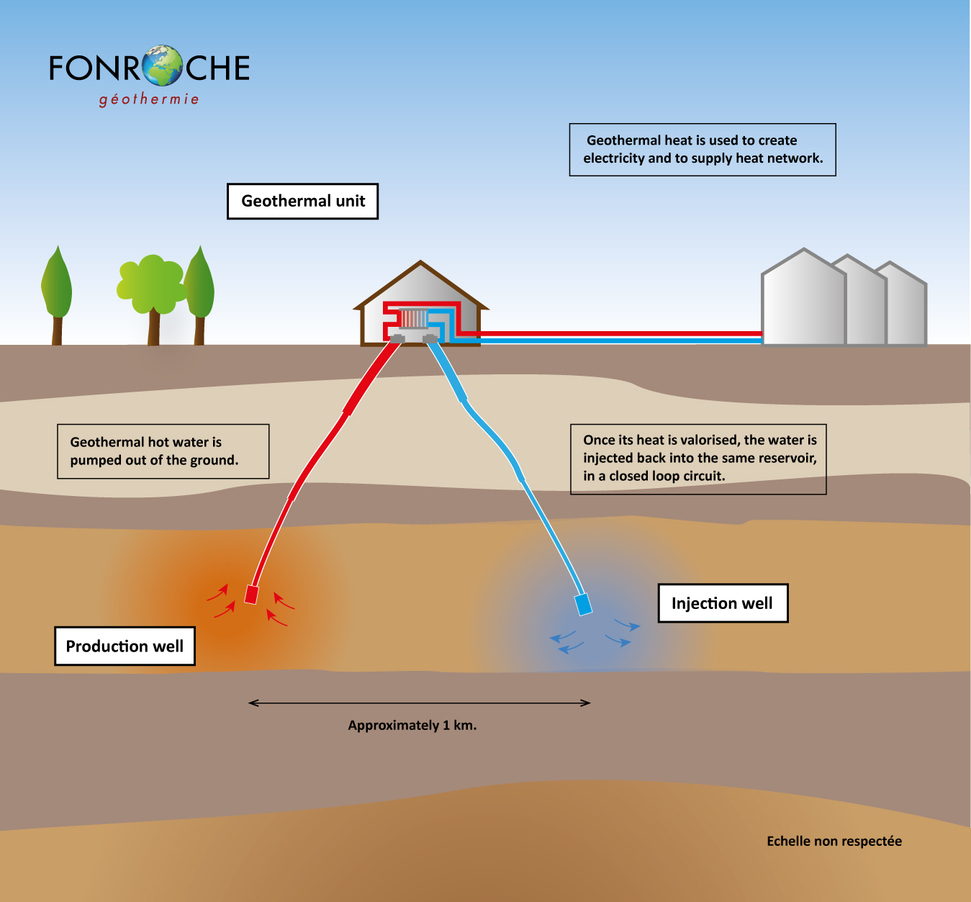